Clues for solving the mystery of evolution

Why is life so diverse? Great discoveries in the life sciences, such as Darwin’s theory of evolution and Mendel’s law of inheritance, were made by closely observing various living things.
From the diverse organisms in the forests and seas, we can explore the origins of evolution.

On some mornings, the first thing Professor Miura does after arriving at his laboratory is put on his wet suit and dive into the sea. His laboratory is based in the Misaki Marine Biological Station (MMBS), The University of Tokyo, which is located at the tip of the Miura Peninsula (in Kanagawa Prefecture), which divides Tokyo Bay from Sagami Bay.

His research theme is “phenotypic plasticity” in animals. Phenotype is the observable characteristics or traits of an organism. While the phenotype is largely determined by the genome, genetic information is not the only determinant of the phenotype, which in many cases is influenced by environmental factors as well. Phenotypic plasticity refers to the ability of an organism to plastically change its phenotype depending on the environment.

“Many insects change their phenotype according to the season they undergo ecdysis or metamorphosis. A typical example is how some butterflies can change the shape and color of their wings depending on the season. Another example is social insects such as ants, bees and termites. They have different castes within their colony, and the queen, king, soldiers and workers each show distinct traits even though their genomes are nearly identical. I study the mechanism of this phenotypic plasticity and its significance in evolution.”

Professor Miura dives into the sea to catch and study marine organisms with phenotypic plasticity. The sea area around MMBS is at the border of Tokyo Bay and Sagami Bay, blessed with rich marine biodiversity. “I often catch weird creatures that are hardly studied by anybody,” he said, smiling like a boy who has found a treasure chest.

One of the marine animals that Professor Miura is focusing on right now is the Syllidae, a family of worms closely related to sandworms (see bottom left and right photos on page 3). This worm attaches itself to rocks or the sea bottom where it matures. As it matures, it gradually develops an ovary or testis at the posterior end of its body. When the worm is fully mature, the posterior end breaks off and starts swimming on its own to spawn eggs or sperm. This spawning individual is called a stolon, which also has its own head and eyes. The stolon is a clone that has the same genome as its parent. The stolon dies when it completes its mission of spawning eggs or sperm, but the parent worm remains on the seabed and grows a new posterior end (another stolon), which will be released again for another round of spawning.

“Although the stolon is a clone of the parent worm, it expresses a different set of traits from its parent. We are now working to find out the secrets of what environmental factors induce the formation of a stolon and how the posterior end turns into a stolon.” Professor Miura started to study marine organisms in earnest when he was assigned to MMBS in 2017. Until then, his research focused on mainly social insects, namely termites and aphids (see top left and top right photos on page 3).

Termites have several castes (i.e., classes with different morphology and roles) in their colony: the reproductive caste (queens and kings), soldiers, and workers. In Hodotermopsis sjostedti (a termite species), which Professor Miura has been studying for a long time, some workers differentiate into reproductive individuals and soldiers through a series of molts, while other workers remain as workers throughout their lives. Hodotermopsis sjostedti kept in the lab. Those with large brown jaws are the soldiers. The white ones are the workers. Aphids gathered on the back of a leaf that was found on the premise of MMBS.

◎Science can accommodate the interests and persistence of a lifetime

“I wanted to become an adventurer when I was a student,” answered Professor Miura when I asked him how he came to be a biologist. “I used to love unicorn beetles and stag beetles as a kid so I decided to major in biology. However, biology was a popular subject at the School of Science and I needed good grades in order to advance to the biology course in my junior year. So, I voluntarily repeated my sophomore year and studied harder than when I was preparing for the university entrance exam.”

He took many language classes to raise his overall grades in foreign language, including Indonesian.

“I was also a Boy Scout as a child. I was fascinated when I visited Iriomote Island in Okinawa and felt like I was on an adventure. Eager to see real tropical rainforests, I also traveled to Borneo Island in Indonesia. I thought that if I studied insects that inhabit tropical rainforests, I would be able to enjoy adventure and learn about insects at the same time, which is why I decided to advance to graduate school. I joined a lab doing field work in the tropics; however, it’s not that easy to find unicorn beetles and stag beetles. I started studying termites because they could be found everywhere in the rainforests and they were easy to handle.”

Since then, his research focused primarily on social insects, so why has he started studying marine animals in addition to insects?

“Insects are taxonomically classified as Insecta, a very large group within the arthropod phylum. We have learned a lot about insects, but there are even more diverse creatures in the sea, many of which are positioned nearer to the root of the phylogenetic tree or the tree of evolution. These creatures exhibit various phenomena that cannot be explained by our common understanding of insects or arthropods. If we can clearly understand their biology and the mechanism of their development and differentiation, we will be able to come closer to the origins of evolution.”

Professor Miura is also studying acoels, which are considered to have been the first animals that came to have a symmetrical morphology in the process of biological evolution. He says that research on acoels will “provide important clues for understanding the evolution of symmetric animals, including humans.” Images of a Syllidae worm seen through a microscope.

He consistently had a joyful smile on his face as he talked about his research.

“I enjoy research so much that even now I feel like I’m on summer vacation. I hope students will stick to what they find interesting until they get to the very bottom of it as I believe that science is broad and deep enough to accommodate the interests and persistence of a lifetime.” 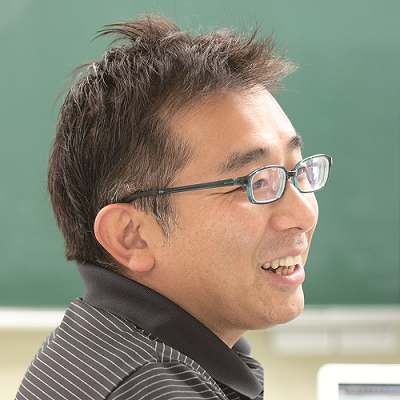