Studying and Living Experiences in Tokyo

I came to Japan for the first time in 2015. I arrived at the airport on a Saturday and then directly went to the Mitaka International Hall of Residence, one of the dormitories of the University of Tokyo (UTokyo). Mitaka is far from Hongo Campus, but the railway system in Tokyo is very convenient. The commute was long, but I became used to it and used the time to read, sleep or listen to music. The rent for the dormitory was not high and while living there, I made many good friends with students from countries such as Japan, the USA and South Korea. I feel thankful and happy that I could live in the dormitory for two years. 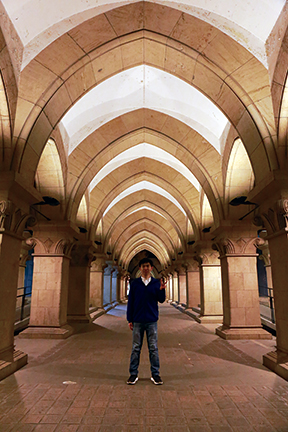 The author of this article and the arches on Hongo Campus.

UTokyo is the first modern university in Japan with a history of more than 140 years. The Department of Astrology, now the Department of Astronomy, was established at the same time as UTokyo. From 2015 to 2017, I was a Master’s student in Prof. Onaka’s lab in the Department of Astronomy where I analyzed infrared spectroscopic data obtained with the Japanese satellite AKARI. Now I am a Ph.D. student doing research on astronomical instrumentation in Prof. Tamura’s lab. In addition to the outstanding professors and the advanced instruments, our department also has intensive international exchanges. Many visiting professors come to teach students in classes. Seminars are also given regularly by researchers from Japan and abroad. In addition to attending classes and doing research on campus, I have given oral presentations at Japanese nationwide and international conferences, and have talked with many researchers from around the world.

In Tokyo, each season has its own color, and the UTokyo campuses are especially beautiful.I like viewing the pink cherry blossoms in spring and the yellow ginkgo trees in autumn. The summer can be hot, but the winter is not cold. Overall, the weather is usually comfortable. Near the campuses, there are also many sightseeing places such as Ueno, Asakusa and Ginza. 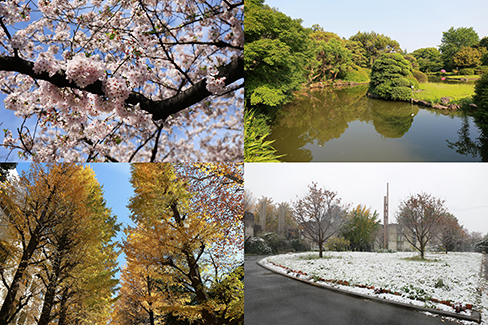 I like the brilliant and splendid traditional Chinese culture very much, which is quite different from the culture in recent years in mainland China. The traditional culture in Japan is strongly influenced by Ancient China, especially the Tang Dynasty. It is well protected and treasured in Japan, which can be seen from many aspects such as traditional clothes, royal palaces, and traditional Chinese characters. There are also many historic sites on campus, including Akamon Gate and Sanshiro Pond, which can be accessed by students very easily.

There are many public holidays in Japan. Students also have long holidays in summer and winter. I went home during the winter holiday to visit my family and enjoy the Chinese New Year. In the summer of 2016, I climbed Mount Fuji with my friends, and I was very excited to see the sunrise from the top of the mountain.

In this article, I have written about my studying and living experiences in Tokyo as a foreign student to provide some information to students who want to study at UTokyo. I would like to express my deep thanks to Prof. Onaka and Prof. Tamura for helping me. I would also like to express my thanks to my family for supporting me.